We all have instances that have marked us deeply.

I remember being around 22, still in college and convinced the world was all cotton candy and rainbows.  One day I was at the mall by myself for a while before my friends met up with me.  I was walking down the main drag of stores when a woman stopped me.

I’m a friendly sort so I didn’t think anything of it.  She proceeds to tell me she can’t believe I would tattoo myself, because didn’t I know I would never be a beautiful bride?

When she said that I remember being shocked.  I might have mumbled something and wandered away, bleeding on the inside.  I’d never thought of getting married, I’ve never been fixated on the idea but suddenly I knew that I would never be a beautiful bride.  I already had massive confidence issues going on and this didn’t help.

My perception didn’t change until around five years later when I was looking at my friend’s wedding pictures.  He’d gotten married to a mutual roller derby friend who was a stunning woman with beautiful ink.  Looking at the dress and her and the whole set up – she was a beautiful bride, and she had tattoos.

While I’ll always be self conscious about my body, I’ve accepted that I can be a non-traditional beautiful bride, someday if I decide to get married.  I’ve even used the personal experience with the crazy lady in my paranormal romance, I Spy You that I hope to send out on submission this winter sometime.

So Sunday I was poking around Facebook and I see this link to a website called Tattooed Brides.

I had to look!  The site is all about the tattooed bride and started as a photography venture.  It’s really awesome, I suggest checking it out.  Maybe someday I’ll be on there.  Who knows!

Comments Off on Tattooed Brides

I hear some version of this story a lot:

It was Friday night and we were hanging out and I looked at my friend and said, ‘I want a tattoo.’  So we want to the shop down the street and I got the artist to do this.  It looks like shit./It hurt like hell./They screwed it up./I paid too much.

If you go to a $10 in-and-out place to get your hair cut, you aren’t expecting to look like a celebrity.  If you go to the super fancy car shop, you expect to get top of the line service.  The same goes for tattoo parlors.  Understand that quality work costs more than someone who can operate the tattoo gun and trace lines.

When you’re looking for a place to get your tattoo done, there are a few things you want to think about before you take the plunge.  First, research what your state’s requirements are on the cleanliness of shops are.  Different states have various regulations and standards.  Be familiar with them.  In Texas there is a rating system and a shop will have a certificate that tells you about their rating.  Don’t hesitate to ask about this.  I’ve asked shops before and in one instance the shop was not operating with a clean bill of health.  Do you have any idea how bad that is?

In a tattoo shop you’re in an environment where bodily fluids and sharp objects abound.  There are steps that should be taken to clean up and prevent conditions that would encourage infection and disease.  An infected tattoo is a very bad thing.  I’ve never had a tattoo infection, but I’ve seen the pictures and they hurt to look at.

Once you know the standards of what you should be looking for look up the local shops.  A lot of shops have websites, Facebooks or even a MySpace page where you can go and see the basic shop information.  Personally I’m an online shopper so I’ve always picked shops that had pictures and information on the websites as well as a sample book of the artists’ previous work.  This was how I chose my first artist to work for.  I wanted a woman who could do color work, liked to make original tattoos and a steady hand for long, smooth lines.

Before going into the shop with the intent to be tattooed, go in and just talk to the artists.  They’re used to people coming in to shoot the breeze and the first time they might not pay you a lot of attention – believe me, lots of people come in to BS and waste time.  Ask them questions, ask about the shop, what they like to do.  If you’re wanting some original work it would be a good opportunity to go in and talk about it and maybe sketch some ideas with the artist.  Ask for their input.  I’ll talk more about picking and designing next week, but don’t hesitate to ask questions!

When you find a place you’re comfortable with, an artist you like, it’s a great feeling.  Like the perfect pair of shoes, it’s a great fit.  I cried when my first artist retired and stopped tattooing.  My new artist is amazing and if he disappears it’ll be like loosing a limb.  You might not become best friends with them, but it should be a good working relationship.  So go forth and look!

Tattoo Tales: It’s permanent, and not like a sharpie.

I’m late in posting today.  The weekend got away from me.  Right. So onward!

I’m doing a series on tattoos and talking about the entire process.  Last week I threw the idea out there and this week I want to talk about chosing tattoos and accepting how they will impact your life.

When I was around sixteen I remember drawing this same bird surrounded by multicolored flames.  I was obsessed with this idea because it was spiritual, mythological and personal.  I knew I wanted it tattooed on me, most likely on my back and I rolled the idea around in my head.  For the next few years I added some other elements to the design until I had what would be my tattoo.  I looked at a lot of magazines and imagined how awesome and bad ass I would be with it on my skin.

No one ever told me how tattoos change you.

You might have a friend who talks about getting a tattoo itch or wanting another tattoo.  Most people won’t suffer from tattoo addiction but if you get enough ink into your system you do run the risk.  The addiction is different for each individual.  Some like the pain.  Others like the perceived lifestyle.  And for those with enough coverage, there is the risk of becoming addicted to an oil in the ink itself.  I’m part of the later group.  Typically I go two years between getting big chunks of work done.

When you’re young you think you will always be ____.

I thought I’d always be plugged into the music scene.

Do you know the last concert I went to, much less worked?

Yeah, neither do I. 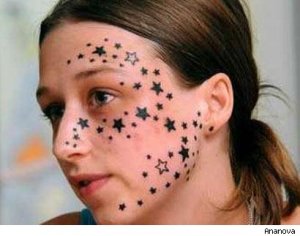 The infamous girl who had her face tattooed and then tried to claim it was an accident and created an international stir.

I never thought that my appearance would matter on a day-to-day basis.  I never thought about having to appear professional despite having skin that’s like a rainbow.  If you would have told me that in my mid-20’s I would have a cardigan collection to rival a nursing home, I would have laughed at you.  There are some tattoos and places that are easy to cover up.  Back.  Upper arms.  Upper thighs.  And then there are those that are a hassle to cover up.  Lower legs. Feet.  Lower arms.  Lastly, the ones that are almost impossible to cover up.  Hands.  Neck.  Face.  Ears.  I work in a professional setting.  Every morning I get up and look at my collection of cute tank tops, sun dresses and work style clothing – and groan because I have to pair it with something long-sleeved.

Let me pause to say: I have never regretted getting tattooed.  How I dress for work is a personal choice, but I made that because I want to be taken professionally and seriously.

Tattoos to the older generation communicate negative things.  They aren’t style or expression, they’re vulgar and ugly.  There are exceptions, but say, if my father ever accepted that I’m tattooed (he pretends he doesn’t know) he would never comment about the beautiful designs or how colors like orange and yellow pop on my skin.

Once I had a woman approach me at the mall.  I was shopping for something alone so I didn’t have a buffer.  People often approach me, curious about my tattoos and I talk about them with people.  This woman approached me and without preamble said, “Why did you do that to yourself? Tattoos are so ugly.  You will never be a beautiful bride.”  For a while it upset me, but then I saw pictures of my friend’s wedding.  His wife has fuscia hair and tons of beautiful tattoos.  You know what?  Their wedding pictures are gorgeous.  She was beautiful.  And she was tattooed.  I tell this story a lot when I talk about tattoos because it illustrates different points of view.  You have to be ready for the compliments and the arrows.

I read an article that said that tattoo removal is up 17%.  People get tattoos removed because they regret them or even because they want something else tattooed on them.  Tattoo removal is painful and expensive.  Think long and hard before you make a choice that will impact your life.  Tattoos aren’t like a sharpie, they won’t wear off, they don’t go away.  Think long and hard about it before you decide they’re for you.

Next week I’m going to be talking about picking out shops, designs and colors.  Everything you should think about before you walk through the doors of a tattoo shop!

Comments Off on Tattoo Tales: It’s permanent, and not like a sharpie.

People approach me often about my tattoos.  Mine are so bright they’ve been mistaken as clothing or body paint.  Generally, people are curious about them, the process, the story behind the tattoo, and how badly it hurt.  I’ve always welcomed conversations about them, because with anything else a better educated person makes wise decisions.  I’m all about understanding things before I make a decision.

I was pretty young when I knew I was going to get a tattoo.  I saw ink on people, rock stars, and I loved it.  I’ve always struggled with body image issues, but beautiful art is always beautiful art – and I wanted to be beautiful art.  I made up a list of things I wanted to get tattooed on me, specifically the tattoo that would one day stretch across my back and I sat on it until I was 21.  The basic design underwent a few alterations but the idea was still the same. I began researching tattooing and the process and how to look for an artist and for several months I rolled the decision around in my head before making that first fateful visit.